This is my second attempt at this post, revising the first attempt which had a major structural problem and an extended digression in the middle.

This elusive quality it is, which causes the thought of whiteness, when divorced from more kindly associations, and coupled with any object terrible in itself, to heighten that terror to the furthest bounds. Witness the white bear of the poles, and the white shark of the tropics; what but their smooth, flaky whiteness makes them the transcendent horrors they are? That ghastly whiteness it is which imparts such an abhorrent mildness, even more loathsome than terrific, to the dumb gloating of their aspect. -Herman Melville 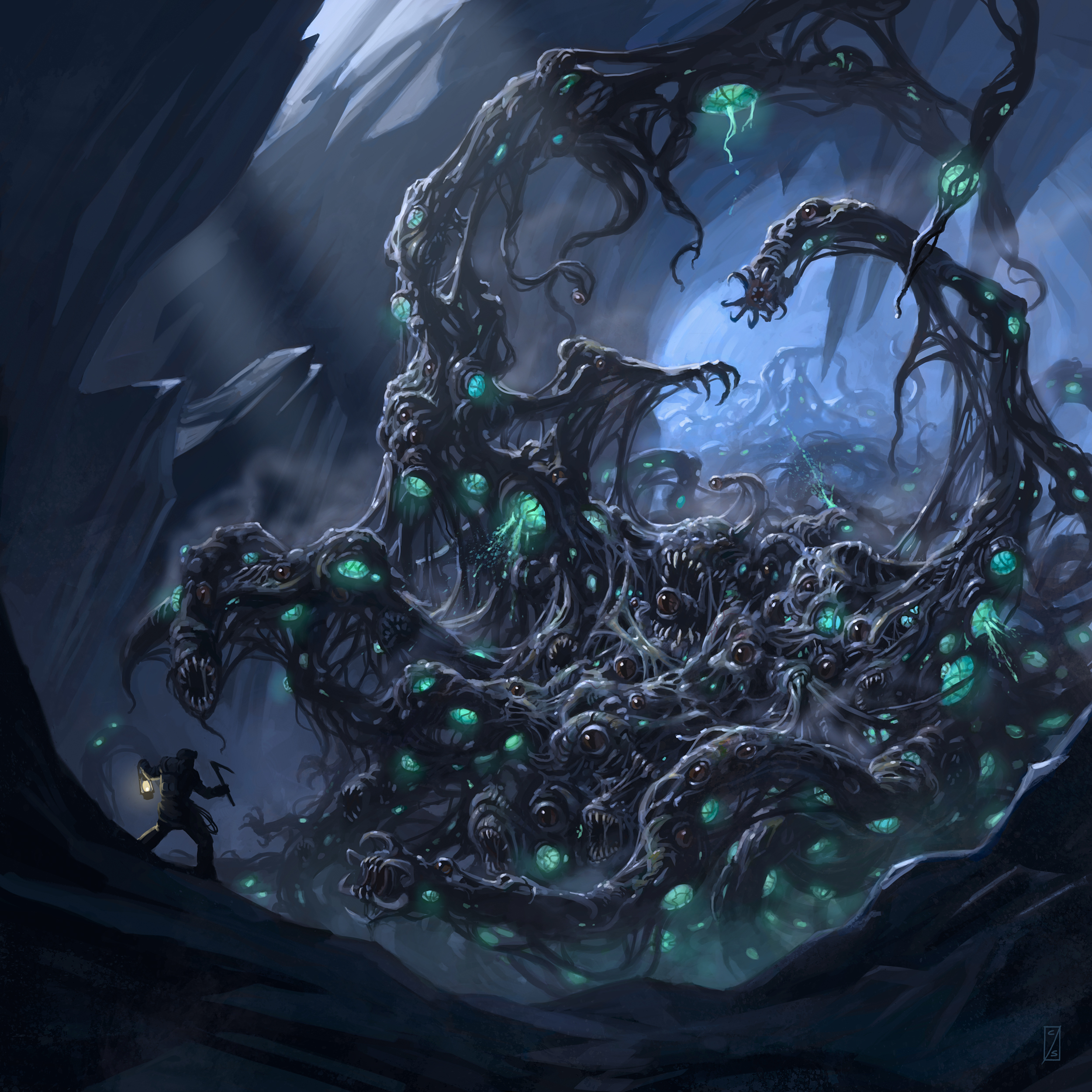 Back when I began this blog, lo these many moons, I wrote about horror that was indifferent to humanity, and how much more frightening it can be than big scary monsters with teeth. A week ago Ran issued the following challenge:

Now some of you think there’s going to be a global technological collapse, and I’m not sure you’re wrong, but I would ask you to weigh the possibility that you’re wrong, to write down a scenario with precise causality and a timeline, and to rethink your models and assumptions if they lead to wrong near-term predictions.

Fair enough, but also somehow wrong. I wrote to him asking for clarification and he specified this was a Kunstler-Greer collapse, where everything technological goes tits up and survivors have to make do with nineteenth century (at best) tools and lifeways. I’m certainly not going to be the one to make that claim seriously, but I also think the way the question is phrased makes it very difficult to answer.

When we’ve had technological collapses, of sorts, in the past, they’ve generally only been understood as technological in retrospect, and only after they have been mitigated if not reversed. The classic example of this is the discovery of the etiology of cholera- a disease that was seen as a moral consequence of slums and slum-dwellers was revealed, in the surprisingly short fullness of time, to be a bacterial infection spread by contaminated groundwater. The disassembly of a pump, construction of sewers and, eventually, sewage treatment effectively ended cholera in the first world.
Other examples need not be quite so dramatic- the blackout that affected the northeast in 2003 was not understood for years and may still be a bit hand-wavy in its official explanation. The flash crash phenomenon is largely inexplicable.

Of course, these last two mini-collapses were sited in “technological” domains of power distribution and stock trading, and unlike cholera never manifested as a moral panic. Which is what makes my next story so interesting:

Unlike carbon dioxide, anthropogenic emissions of which can be readily tracked, methane is a difficult “greenhouse gas” to analyze. For one thing, it decomposes in the geologically brief time period of a few decades into carbon dioxide, making it difficult to model historically. For another thing, while we primarily hear about emissions from clearly anthropogenic sources such as leaky gas wells, unmanaged landfills, and vented coal mines, the EPA lists “enteric fermentation” as the second most significant anthropogenic contributor of methane to the atmosphere. To you and I, that’s cow farts. Are cow farts anthropogenic? Yes. What would the farting ruminant population be like without human-driven animal husbandry? I honestly have no idea.

However, cow farts are a much smaller threat than the potentially “catastrophic” risk posed by the release of methane currently trapped under permafrost. Technically, this methane is the result of anaerobic fermentation in wet soil that has since frozen solid, but, goes the theory, as the climate warms, especially around the poles, the permafrost layer will thin and more of this trapped gas will escape into the atmosphere.

Except, that’s not what’s happening. This past year, in the grip of an el Nino and drought of some severity, Alaska caught fire in a big, big way. Sure, the heat of the surface fire penetrated the ground somewhat and directly melted the permafrost, and sure, the carbon released by burning vegetation contributed to global warming, but more frighteningly, the fires burned off the “duff,” the loose organic insulation layer that keeps permafrost permanently frosty. Next summer, when the air temperature in Alaska goes above freezing, a lot more of the ground will go above freezing too, reaching a methane-release tipping point far earlier than any of the temperature-alone melt models would have predicted.

So, was the el Nino and drought caused by climate change? Maybe. As I mentioned before, there have been civilization-ending el Nino events in the past, though the frequency seems to be increasing. More importantly, the question arises, is this actually a technological collapse? If I were to say to Ran, hey, el Nino events will increase in frequency, leading to non-linear increases in greenhouse gas emissions, would that count? Who decides that a collapse has occurred, and when?

I doubt that the Moche understood ENSO. I doubt the Greenland Norse understood the Little Ice Age. Certainly, nobody who died of cholera before 1854 understood they were sick with bacterial dysentery. The luxury of understanding is granted only with time, and is purchased with knowledge gained in the interim. Recognizing that a world-ending catastrophe- and all catastrophes are world-ending, on some scale- is part of a complex chain of cause and effect, circumscribed by a narrative, comprehensible within the rules of common discourse, this is in itself a form of technology, and may well be considered the most advanced technology of all.

This is where the Kunstler-Greer model of collapse falls on its butt. Those stories are always moral narratives and should be viewed as novels- the collapse that characters endure are the logical consequences of their behaviors, and the drama is in the sudden revelation to survivors that they were wrong/lied to/unreasonably optimistic/generally bastards or otherwise culpable. The Kunstler-Greer collapse is a human monster, a demon that exposes the evil in the human world.

In the inhuman world, the surest sign of an actual technological collapse would be the inability to encompass and interpret what was happening; if a collapse is to be irremediable, it would also have to be permanently inexplicable. This is beyond the radio station going down and you can’t figure out why the internet has been out for a week- this would place the root causes beyond the technology of human knowledge and understanding for the meaningful future, even if the symptoms were as obvious as the bucket under the cholera cot. Or, as obvious as an unexplained rise in maternal mortality, all-cause mortality among middle-aged white adults, alcohol-related deaths, suicides (ignore the graphics, veterans are only part of the toll), drug overdoses… increasingly, the Russian prototype for an American collapse observer is not Dmitri Orlov cheerfully swapping vodka from the trunk of a wheezing Lada, but Masha Gessen, baffled an overwhelmed by the insidious, yet inexplicable, depopulation of her homeland.

Increasingly, this seems to be a more popular kind of apocalyptic horror. In William Gibson’s latest The Peripheral the “Jackpot” that separates the two timelines is described as numinous and vague, unclear even after its partial resolution; in Kim Stanley Robinson’s Aurora the inability to understand ecosystem failure, or a novel pathogen, essentially is the story. HBO’s weird the Leftovers has made it clear that the Sudden Departure will not be explained. In Claire Vaye Watkins’ Gold Fame Citrus a would-be seer (and despicable antihero) tries and fails to garb a whitened, desolate, inhospitable and unseeable landscape- and his equally barren soul- in a fairy-tale menagerie of spirits and beasties which, when stripped away, leave nothing comprehensible behind. In an age of total information awareness, unknowable blankness is emerging as an existential horror all it own and- pace Melville- is accumulating its own color, mass and meaning, becoming a rebuke to the very assumption of narrative continuity.

To Ran and others I can only say, we won’t know what hit us. We won’t even know that we were hit. Isn’t that what we want to hear?

By the way, I tried and failed to work Barbara Ehrenreich into the discussion, and to paraphrase (since I can’t find the original quote) Chris Knowles saying something like “Pagans believe that nature is the embodiment of Gaia, a greek goddess. That they find this at all comforting suggests they have forgotten their Greek mythology.”

3 thoughts on “On the Theology of Monsters, Take Two”